President of the Australasian Aikikai

Colin started Aikido in 1972 with the Aikikai of Great Britain later to become the British Aikido Federation (BAF) and later the United Kingdom Aikikai (U.K.A.)

Colin Sensei was fortunate enough to train under Chiba Sensei until his return to Japan. He has also trained under many guest instructors invited by Chiba Sensei.

In January 2010 Sensei was promoted to Godan (5th Dan), and as of January 2017, Sensei Colin was appointed to Rokdan (6th Dan) as per Hombu  traditional new year’s celebrations (kagamibiraki).

Colin formed Central Coast Aikido on his arrival to the coast in 1998 with the sole purpose of establishing an Aikido dojo with a good standard of instruction and practice on the coast that is second to none.

He has a strong interest in the weapons side of Aikido and also in the art of Sword drawing known as Iaido.

Colin is the Chief instructor of the Australasian Aikikai & also the President of the Management Committee.

Andrew has been learning Aikido from Colin Hackett Sensei (6th Dan Shidoin) on the Central Coast since 2003. He was awarded 3rd Dan in 2015 and Fukushidoin in 2013.Andrew has travelled many times to Japan and New Zealand and also to New Caledonia, England and the United States to train in Aikido. 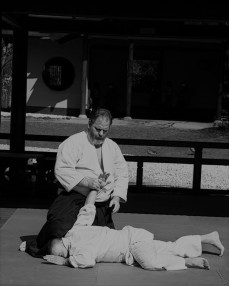 Scott has studied various martial arts since the age of 9.  He has been part of Central Coast Aikikai since 2001. Scott has also trained in Japan and the UK. He is very experienced with teaching both kids and adults. Scott currently holds the grade of 3rd Dan and Fukushidoin.

Brad has studied Aikido with  Colin Hackett Sensei (6th Dan Shidoin) on the Central Coast. He was awarded 2nd Dan in 2017.

Brian has  studied Aikido with  Colin Hackett Sensei (6th Dan Shidoin) on the Central Coast. He was awarded 2nd Dan in 2017.

Aikido is a Japanese martial art and a form of self-defence that uses locks, holds, throws, and the opponent’s own movements and momentum. It is a martial art form which suits people of all size, shape and gender, and does not require significant physical strength.  Become more fit, flexible, and responsive to your body movements and that of others. All welcome! Free trial for the first class
Loading Comments...
%d bloggers like this: